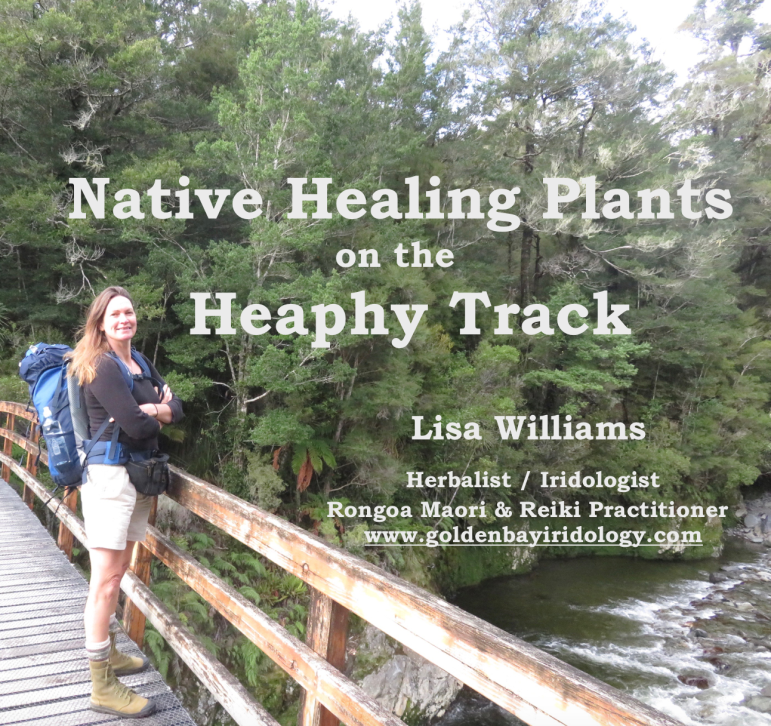 Autumn air is filled with medicinal aromas and phenols of these forest plants, their leaves, bark, cones, flowers and berries.  The frangipani / lemon scent of the kiekie stimulates the senses as it drifts through the forest canopy.  Aromatic red berries of Miro, Rimu and Kanono blend with flowering Southern Rata and Manuka Berries.  These are all part of the magnificent potpourri that line the pathway as they ripen and fall.

These ancient forest giants connect the deep soil substructure of microbial colonies to the astral planes, in rhythm with the sun and moon, cleansing our atmosphere and creating life giving oxygen for all species to live.

Crystal clear, pure water flows from the valleys and when drinking the essence of this forest, the minerals penetrate and strengthen every cell in our body providing Nature Therapy.  The rhythm of the 4 day walk sets in – the timeless trance of travel and thought – meditation on movement and being at one with nature.

A recent article in the International Journal of Environmental Research and Public Health states that our immune system is strengthened by Forest Bathing.   This research found an association with healing and therapeutic effects which are invaluable and beneficial on many levels, including increased immune system function, reduced blood pressure, less allergies and respiratory issues, reduced depression, anxiety and stress.  The Japanese call Forest Bathing Shinrin-Yoku and can be prescribed by a doctor.

On day 2, at an altitude of 625 metres, the bush transforms into the Gouland Downs.  This high country rolling tussock land is home to Takahe birds which graze on its stalks.  Mountain Manuka grows as a stunted ground cover trackside resembling wild Thyme. 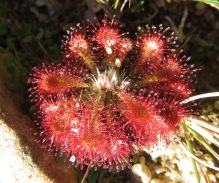 Sundews (Drosera) also appear, a Carnivorous plant luring, capturing, and digesting insects using stalked mucilaginous  glands covering their leaf surfaces. The insects are used to supplement the poor mineral nutrition of the soil in which the plants grow.  The species vary greatly in size and form, and are native to every continent except Antarctica.

The ‘Enchanted Forest’ grows on a Limestone vein running through the Gouland Downs, the rocks are some of the oldest in New Zealand.   The beech forest here is covered with lichens and thick moss, some of which have antiseptic properties.

Mosses were used by the Maori to line babies baskets and bedding, pack around wounds and absorb blood, it also proved useful during womens moontime cycle.

Kakaruwai & Piwakawaka seduce you with song on their piece of track – while the Ruru watch you pass by silently from the high branches in the early dawn.

Various Koromiko (Hebe Salicifolia) pop up all the way along the track, reaching 2m in height and have long pale whitish / purple flowers. The young leaf tips can be chewed to relieve stomach aches, diarrhoea and dysentery. It was used extensively in the Second World War for this purpose when dried leaves were sent overseas to New Zealand soldiers. The active ingredient is a phenolic glycocide.

The bright sky blue of the fungus Werewere kokako (Entoloma hochstetteri) resembles the blue wattle of the Kokako bird, hence the name. It’s featured on the NZ $50 note.  This fungi has Psilocybin effects, is very toxic and if you are found in possession of these magic mushrooms, being a Class A drug, hefty penalties can be applied.

On day 3 we descend to 300 metres, the forest transforms once again and podocarps appear.  Leaving behind stunted herbaceous plants, the forest grows as we slowly descend westward towards sea level passing through some of the most beautiful pristine and untouched forest of Mountain Beech and Rimu,  into Nikau Palm, Southern Rata,  Miro, Kahikatea and Matai.   Native moths appear in the clear moonlight nights pollinating the native trees. 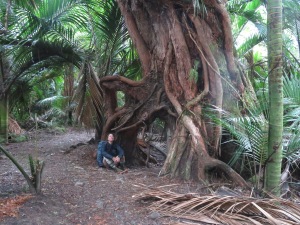 Other broad-leaved species, such as Rata, Mahoe, Kamahi, Pigeonwood, Hinau, Pokaka and Pukatea, appear, adding diversity to the forest.  Undergrowth is richer in the lowland forest.  Kiekie and Kareo twist their way upwards, while many small shrubs jostle for light on the forest floor.

The final 16 kilometre leg from the Heaphy River mouth to Kohaihai skirts the western coastline.  Here the forest is lush with many large-leaved glossy plants and vines.

My eyes are forever cast upon the ngahere (forest), reading the plants as I walk – it is a library of botanical information. 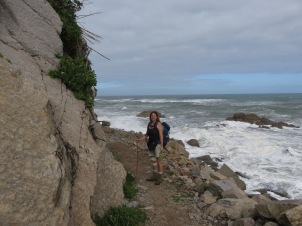 The cold sea pounds the rocky points. Tight clumps of wiry shrubs huddle together as a testimony to their agility against the powerful western wind.

Some of the wild native healing plants that appear along the way…….. 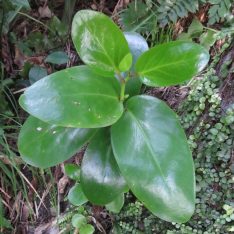 Karaka – (Corynocarpus laevigatus) growing in groves along the coastal trail where the local maori would come for the annual harvest of these poisonous berries, soaking in salt water, cooking and carefully processing until they were edible. The shiny surface of the leaves can be applied to wounds to aid healing. 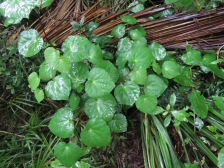 Kawakawa – (Macropiper Excelsum) – grows prolifically along the western coast playing a significant spiritual and physical role for the people of Aotearoa helping to cure everything from bronchial infections to dressings for wounds.

Karamu – (Coprosma Lucidia) –  Belongs to same family as the coffee bean and berries from all 5 species can be eaten.  Autumn is a good time to walk in the forest as all the berries are ripe and full of vitamins and micro nutrients.  The pre-european travelled alot at this time as the birds were also fat from feeding on them providing good sustenance for the traveller.  All being a vital food source preparing for the cooler months of winter.  I believe its best to leave the berries for the birds to eat and disperse the seed for their own benefits and for forest regeneration.

Tutae Koau – Wild Celery (Apium prostratum) found growing on a rocky exposed precipice on the west coast.  According to Murdoch Riley in his book Maori Healing and Herbal, the maori knew this plant well by the time Durville, Cook and other European explorers arrived, its a wonderful food plant with diuretic and tonic qualities and was used by the ships crews to help combat scurvy during the early expeditions. 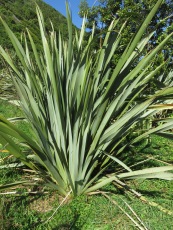 Harakeke – Flax – (Phormium Tenax) – is a very important plant with lots of tikanga around it.  Mainly used for weaving, but the gel at the root base can be used for sunburn, itchy bites, and eczema.  The ingested root is a laxative and must not be used by pregnant women. 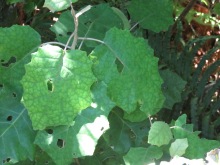 Rangiora – (Brachyglottis repanda) – the leaves have a strong antiseptic power and are poisonous if ingested .  Its known as the bushmens friend as it’s a handy replacement for toilet paper.  Its white underside can also be used as paper on which to write.

NZ Native Spinach – (Tetragonia tetragonioides) – very robust, grows well in drought & coastal saline-rich soils, unaffected by bugs or pests, its a ground cover. High in vitamin A and C, a balance of calcium to phosphorous levels makes it ideal for calcium absorption in the body, contains a high level of oxalic acid.

Ongaonga – NZ Tree Nettle – (Urtica Ferox) – Is one of New Zealand’s most poisonous native plants.  Standing up to two metres tall.  Coarsely toothed leaves have numerous white stinging hairs (trichomes) which can inject toxins into the skin, giving rise to pain and a rash.  In extreme cases where animals and people have walked through a large patch – neurological, respiratory problems and convulsions have occurred and death can result.  However, a minor brush can be eased by the juice of the leaves of dock, kawakawa or plantain.

Kareo – Supplejack – (Ripogonum Scandens) – Used for weaving baskets and the end of a cut vine can be left in glass overnight to drain the fluid and drink.

Our native flora and fauna are to be honoured and understood.  This is written with full respect to all that grows from Papatuanuku.  The more we look, the more we understand and the greater our  connection is to our Earth Mother.  The preservation of native wildlife, pristine wilderness areas and National Parks is of utmost importance for this and future generations.